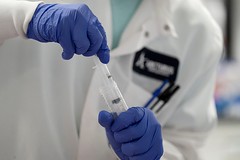 People aged 60 and above will be given the Sinovac vaccine under Phase 2 of Malaysia's national COVID-19 immunisation programme starting on Apr 19, said coordinating minister Khairy Jamaluddin on Monday (Apr 12).

The COVID-19 Vaccine Access Guarantee Special Committee made the decision after taking into consideration the latest data and data from other countries that showed the Sinovac vaccine is safe, effective and stable for those aged 60 and above, Mr Khairy said.

Mr Khairy, who is also Science, Technology and Innovation Minister, noted that countries that have started dispensing the Sinovac vaccine to those aged 60 years and above include: Turkey, with 11 million senior citizens; Brazil, with more than 7 million recipients; and Chile, with more than 3 million people.

He said that Brazilian clinical trials and papers under review showed that the Sinovac vaccine's secondary efficacy against COVID-19 was 83.7 per cent for moderate cases and 100 per cent for severe cases.

The minister was speaking at a media conference on the development of the national immunisation programme with Health Minister Dr Adham Baba.

Mr Khairy added that 8.5 million people have registered for the COVID-19 vaccine.

The federal territories of Putrajaya and Kuala Lumpur, as well as Selangor, Penang and Negeri Sembilan recorded the highest registration in relation to the size of the population, he said.

The minister said 31,776 appointments had been sent to Phase 2 vaccine recipients through the MySejahtera app and SMS.

"I am urging those who have received appointment details to reply as it would enable us (to) carry out planning at vaccine centres (PPV).

"If we do not know the number turning out, there may be wastage of vaccine or insufficient vaccine doses in PPV," he said.

For those who replied that they were not attending, their appointments would be rescheduled and if they are still reluctant to attend, the government will check the reasons for their hesitation, he said. - CNA