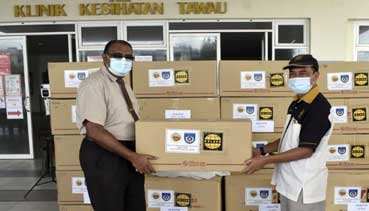 “We are lucky because there are those who are concerned, ensuring that our PPE supply is available and supplies are not depleted. For example, we have received PPE contributions from the Organisation of Graduates of Educational Institutions, Malaysia (Haluan Malaysia).

“The contribution from Haluan Malaysia can be used for a period of two months and besides that many others have come forward and promised to continue to contribute PPE," said Tawau District Health officer, Dr G. Navindran when met here.

He said, the concern of all parties proves that Malaysians are united in fighting COVID-19.

“The aid was flown specially by a Royal Malaysian Air Force (RMAF) aircraft,” he said.

He said, since the Movement Control Order (MCO) last March, Haluan is one of the leading NGOs channelling aid in the form of packed meals and daily necessities to the asnaf and needy.

“To date, Haluan has identified and offered assistance to more than 2,500 families in more than 60 villages in Sabah including Tawau, Sandakan, Lahad Datu, Kunak, Semporna, Kota Kinabalu, Tuaran and Kota Belud," he said.

He added, Haluan not only provides food assistance, but also guidance, advice and counselling to the communities in several areas. - Bernama