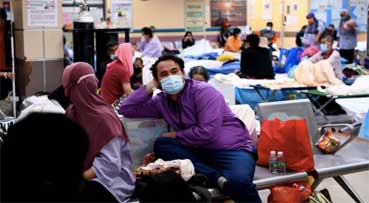 THE nation has reported its first Omicron community transmission after a 37-year-old man, a resident of Medan, North Sumatra, tested positive for the variant during a trip to Jakarta with his wife.

The man, who has so far been asymptomatic, is currently being treated at the Sulianto Saroso Infectious Diseases Hospital in North Jakarta for further evaluation and observation, Health Ministry Covid-19 spokesman Siti Nadia Tarmizi said in an online media briefing yesterday. The man, who tested positive on Dec 20 after a polymerase chain reaction (PCR) test, was confirmed on Monday to have the Omicron variant through a genome sequencing test.

He had visited a popular shopping mall in Jakarta’s Central Business District and stayed in an apartment in North Jakarta.

“He did a lot of activities prior to him testing PCR positive. We are conducting contact tracing now, 14 days going backward from Dec 20.

“We will be testing the people at restaurants he visited and the apartment he stayed in,” Siti Nadia said.

The man tested positive on an antigen rapid test on Dec 19 and on PCR on Dec 20.

Indonesia has so far reported 47 confirmed cases of Omicron and the latest, the 47th, is the first community transmission.

The man did not have any recent record of travelling overseas, nor did he have any known contact with anyone who had returned from abroad.

He had earlier resisted being evacuated from the apartment he was staying in, according to Siti Nadia.

The Medan resident frequently travelled to Jakarta with his wife, who had tested negative for the virus, Siti Nadia added, pointing out that he and his wife arrived in Jakarta on Dec 6.

“This first community transmission case has prompted us to tighten protocols for domestic travellers, as mobility would potentially lead to a case surge, especially ahead of the year-end break,” she said.

“We have to make sure travellers using all modes of transportation have been fully vaccinated and have (at least) tested antigen negative prior to departure.” — The Straits Times/ANN