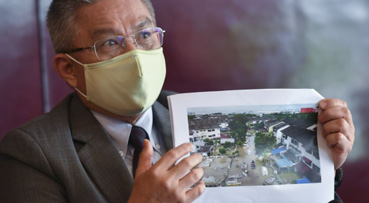 A total of 20 high-powered drones will be deployed for monitoring purposes and for delivery of vital supplies to flood-hit areas, said Science, Technology and Innovation (Mosti) Minister Datuk Seri Dr Adham Baba.

He said the ministry has received the cooperation of five private companies to supply the drones which would be operated by the Drone Services Special Emergency Response Team (PTK2Dron).

"These drones will be able to locate flood victims who may be trapped as well as monitor roads and slope movements which may cause landslides during the floods," he told the media after launching DeScale Green Technology products on Dec 21.

He said the ministry was still waiting for approval from the Civil Aviation Authority of Malaysia (CAAM) to fly the drones, to assist the National Security Council (MKN), National Disaster Relief Management Agency (Nadma) and Environment and Water Ministry (Kasa), in efforts to assess the current situation at the flood-hit areas more effectively.

The drones would facilitate the view from an aerial vantage point to assist related agencies in providing emergency services to flood victims who are stranded and may have no access to communication networks, he added.

He said the delivery drone is capable of carrying a load of up to 10 kilogrammes of supplies such as food and medicines on each trip to dangerous and difficult-to-access sites.

On satellite image observations, Dr Adham said until yesterday, there was a 60% reduction of flooded areas in Taman Sri Muda and Section 24 in Shah Alam, as compared to last Saturday (Dec 18).