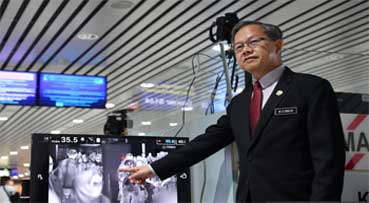 The Health Ministry is in the process of tracing flight crew members and passengers on board the same aircraft with the American woman who tested positive for Covid-19 here.

Deputy Health Minister Dr Lee Boon Chye said the ministry is working closely with the airline company to obtain particulars of the other passengers on board the aircraft that arrived in the country from Cambodia on Feb 14.

“MOH (the Health Ministry) is working closely with airlines to get the particulars of the passengers,” Dr Lee told the New Straits Times.

It was reported earlier that the woman, 83, tested positive for the coronavirus, bringing the tally of the number of infections in Malaysia to 22.

Health director-general Datuk Dr Noor Hisham Abdullah, in a statement, had said that the woman was among a group of 145 passengers of a cruise ship that docked in Cambodia on Feb 13.

All 145 passengers of the ship, said Dr Noor Hisham, had taken a flight to Malaysia on Feb 14.

Out of the number, the woman and her 85-year-old husband who arrived at the Kuala Lumpur International Airport on Friday showed symptoms of infection and were subsequently referred to the Sungai Buloh Hospital for further tests.

Outcome of further tests conducted on the woman by the Institute for Medical Research that was obtained on Saturday showed that she is positive for Covid-19.

The woman was reported to be in stable condition and that she is currently being treated at an isolation ward at the hospital.

Her husband, who is also an American citizen, tested negative but is still receiving treatment as well as being monitored at the hospital due to his symptoms.

According to the normal procedure, Dr Lee said all passengers and flight crew members on the same aircraft with the patient would be issued a Health Alert Card although they did not display symptoms associated with the disease.

“Only those who sit close to the patient are considered contacts and they will be subjected to physical examination and Covid-19 examination as well as 14 days self quarantine,” Dr Lee said.