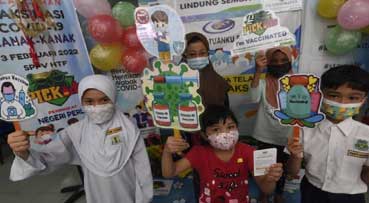 A total of 169,710 children aged between five and 11 years, or  4.8 per cent of their population in the country, have received the first dose of the COVID-19 vaccine as of yesterday.

They were given the vaccine under the National COVID-19 Immunisation Programme for Children (PICKids) which was launched last Feb 3 and will receive the second dose within an eight-week interval.

Meanwhile, based on the COVIDNOW portal, a total of 13,258,893 or 56.4 per cent of the adult population in the country have received the booster dose as of yesterday.

Meanwhile, according to the Health Ministry’s GitHub portal, a total of 11 deaths due to COVID-19 were reported yesterday, with the highest number in Sabah, totalling five, followed by four in Johor and one each in  Kelantan and Pahang. - Bernama