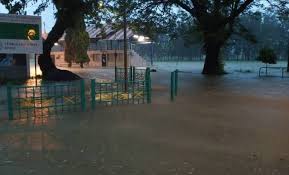 The number of flood victims in three districts in Sabah, namely Kudat, Kota Marudu and Pitas have recorded a sharp increase to 746 people from 225 families as at 8 pm tonight.

According to a statement of the Sabah State Disaster Management Committee, all victims were housed at eight temporary relief centres (PPS) opened in the three districts.

One more PPS was opened in Kudat at Sekolah Kebangsaan (SK) Sikuati which housed 40 families, in addition to one in the district at SK Tun Dato Hj Mustapha which was sheltering 71 victims from 10 families since this morning.

According the statement, the total number victims evacuated to the PPS at SK Sikuati, SMK Tandek and Kampung Kusilad hall were being updated now.

A total of 69 villages comprising 17 in Kudat, Kota Marudu (11) and Pitas (41) were affected by flood following continuous rain since yesterday apart from the occurrence of several landslides. - Bernama