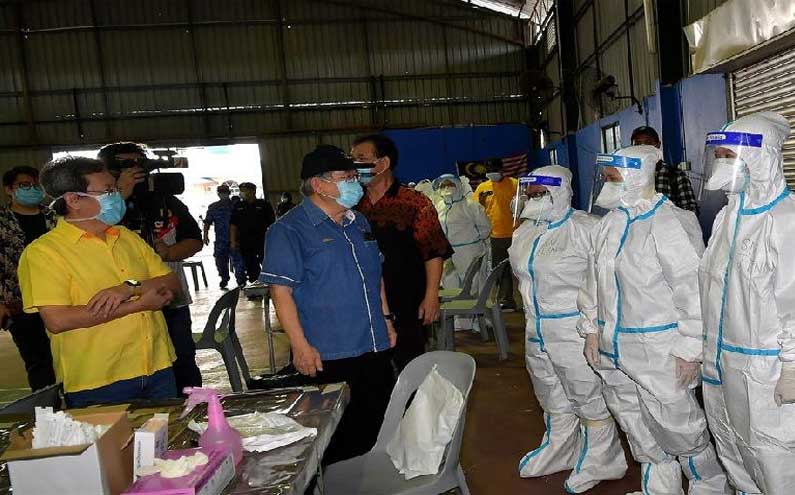 The Sarawak Disaster Management Committee (JPBN) will step up its enforcement to ensure full compliance of the Recovery Movement Control Order (RMCO) in an effort to curb the spread of COVID-19 among locals.

Its chairman Datuk Amar Douglas Uggah Embas also called for stricter enforcement by the authorities to ensure the people adhere to all the guidelines and the standard operating procedures set.

He said besides that COVID-19 screening would be conducted in potential outbreak areas including construction sites, plantations, markets, old folks homes as well as several schools around Kuching and Samarahan.

“As of July 19, a total of 61,368 individuals were screened using rT-PCR (the Real-Time Reverse Transcription Polymerase Chain Reaction) technique statewide, 608 of whom or 0.99 per cent were tested positive," he told the COVID-19 daily press conference here today.

Uggah who is also Deputy Chief Minister I said 833 samples had been taken from 110 construction sites namely four in Sri Aman, Betong (one), Miri (83), Samarahan (three), Sibu (one), Bintulu (16) and Serian (two).

Of the total, he said 788 samples were found to be negative while another 45 samples are still awaiting results.

Uggah said 31 samples had been taken at plantation areas, 16 of which were from local workers adding that of the total samples taken, 24 were tested negative while seven samples are awaiting test results.

"For the COVID-19 screening conducted at the Point of Entry (POE) between June 21 and June 27, some 985 samples were taken randomly for the rT-PCR test, of which 834 returned negative, 151 are pending test results and two were found positive," he said.

Uggah said samples taken randomly at POE will also be increased to 10 per cent of the total passenger arrivals at any one time.

He added that a total of 2,439 samples had been taken from teachers who arrived in the state and of that total, 2,424 were tested negative, 14 samples were awaiting test results, and one came out to be positive.

Meanwhile, he said the state government has no intention completely close its borders despite a spike in imported cases.

"There is concern about the increase in imported cases but so far we are still thinking of mechanisms that can be used to curb the spread including the 14 days self-quarantine," he added. - Bernama