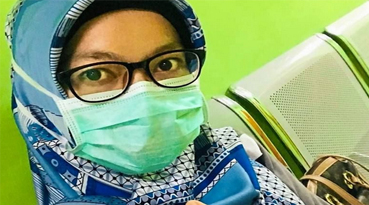 Believing that her country needs her now more than ever, former nurse Nurliana Muhammad, 31, has decided to answer the call from the Health Ministry to serve the country again.

Nurliana said she believes that her age and experience in the medical field would come in handy during this time of crisis.

“I believe that I’m still capable of helping the frontliners as I’m still young and healthy.

“Answering this call, I feel like I’m also giving back to society,” she said, adding that the fight against Covid-19 is every Malaysian’s responsibility.

Now a businesswoman, Nurliana said she got to know about the call through her friends who work in government hospitals.

“When I learnt about the government’s desire for retired nurses to come back and care for the sick, I did not have to think twice,” she said.

Nurliana said a week after she signed up online, she received a call from a matron from the nursing division in Putrajaya.

“I will probably be sent to one

of the hospitals in Pahang. Although I’m coming back after a long hiatus, I feel that I’m ready,” she said.

Nurliana received her training at the nursing college in Sri Manjung, Perak.

After her graduation, she served at the Kajang Plaza Medical Centre for four years before she decided to quit in November 2017 to pursue her business career.

Nurliana, who is still single, said despite the risk she is taking, she has the full support of her family.

“Both my parents are behind me as they know that I am doing this for my country,” said the Pahang-born lass.

As of Sunday, 157 volunteers have joined and are placed in stages to help the Covid-19 medical assistance team.

“A further 1,008 medical practitioners are expected to join the teams in the hospitals,” he said.