Health Ministry: Nearly one in five Malaysians has diabetes 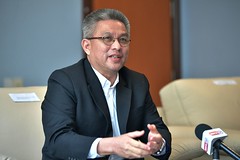 Nearly one in five Malaysian adults, or 18.3%, has diabetes, says the Health Ministry.

A recent survey showed that an estimated 3.9 million Malaysians aged 18 and above are suffering from diabetes, said its minister Datuk Seri Dr Adham Baba.

When launching the National Health and Morbidity Survey (NHMS) 2019, the Health Minister said non-communicable diseases (NCD) such as diabetes and their risk factors are on the rise.

(In the NHMS 2015, the prevalence of diabetes in the country was reported as 17.5%, before the measurement of the disease was changed in line with the World Health Organisation standards.)

He added that stunting among children was an area of concern for the Ministry, citing malnutrition as a cause for the problem.

Health literacy and education among the public, he added, were lacking, with 35% of Malaysian adults found to have low health literacy.

The National Health and Morbidity Survey is conducted in cycles of four years, where the topic of the first year focuses on non-communicable diseases and demand of healthcare.

The survey has more than 32,000 respondents from all states across Malaysia.