Malaysia to receive 3.52 mn doses of vaccine this month 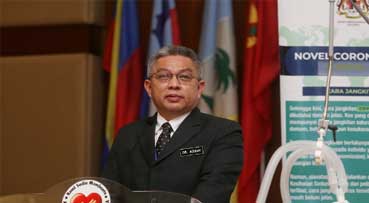 Malaysia will be receiving 3.52 million doses of Covid-19 vaccine from three vaccine suppliers namely Pfizer BioNtech, Sinovac and AstraZeneca this month with more coming in the following months to expedite the process of vaccination.

Health Minister Datuk Seri Dr Adham Baba (pix) said the total is for two doses for each person and about 1.7 million people in the country will benefit from the vaccine stock.

“The supply of vaccines will be higher from June and this month alone, we are getting 3.52 million doses. From June, July and August we will be receiving more so we are confident we could speed up the process of vaccination.

“The Health Ministry has procured and confirmed delivery according to schedule, similarly for the third phase,” he told reporters after monitoring the implementation of the National Covid-19 Immunisation Programme at a private facility here today.

Therefore, he is confident the vaccine dispensing phase under the programme will be implemented according to schedule after taking delivery of all doses sent to this country even though there were allegations of problems of supply shortage.

In this regard, he said the government has approved 4,000 vaccine jabs for foreign missions in this country involving diplomats, counsellors and their dependents starting this week.

According to him, they have applied to the government within seven days to list all recipients under their charge apart from requiring their own doctors for the vaccination.

“So far, we have allowed diplomats from the British High Commission while the Australian High Commission are in the process of providing its list to that we can forward them into MySejahtera before giving the vaccine, all vials have to be uncontaminated and would have to be disposed of according to pharmaceutical requirements,” he said.

Meanwhile, Dr Adham via Twitter today said 632,366 individuals have completed two doses of vaccine under the national immunisation programme as at yesterday.

He said the total is part of the 991,906 individuals who received their first dose bringing the overall total first doses of vaccine dispensed for first and second doses in the country to 1,624,272 doses as at yesterday.

Meanwhile, he said as at yesterday, 40.6% or 9,848,371 individuals have registered for vaccine shots with Selangor recording the highest registration with 2,528,707 individuals which is 52.2%.

According to the immunisation programme the first phase of vaccination which began in February to this month involved 500,000 frontliners including medical personnel.

The second phase which began in April to August involved 9.4 million senior citizens, vulnerable groups and people with disabilities while phase three scheduled from May to February 2022 involved individuals above 18 years old and non-citizens targeting 13.7 million or more people. — Bernama