Surge in dengue cases in Labuan 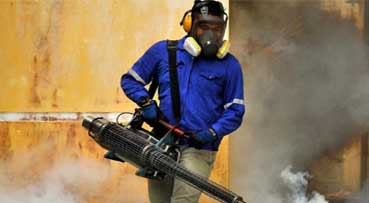 Ten dengue cases have been reported in Labuan so far this year, a 100 per cent increase compared to the whole of last year when there were only five cases, according to the Labuan Health Department.

Its director Dr Ismuni Bohari said Kg Layang-Layangan had been declared as a dengue hotspot following the outbreak.

“It is a worrying situation. If not controlled, clogged drains during the current rainy season will provide a haven for aedes mosquitoes to breed and trigger (another) outbreak,” he told Bernama today.

He urged the local community to ensure that their surroundings are free from mosquito-breeding grounds.

On the hand, foot, and mouth disease (HFMD), he said it is under control although a number of cases were reported recently.

On COVID-19, he said only one case was reported on this duty-free island on Friday, taking the cumulative infections to 21,309 cases.

No new clusters were detected.

He said the cumulative total of recovered COVID-19 cases is 21,065.

Dr Ismuni said COVID-19 screening was still being conducted for travellers from Brunei at the Labuan ferry terminal and for international visitors at the Labuan Airport.