9,703 dengue cases in Johor since January 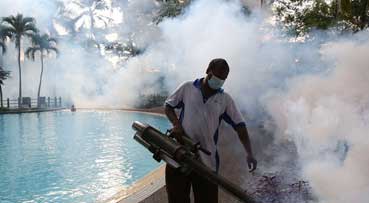 Johor Bahru district recorded the highest number of dengue cases with 7,199 out of 9,703 since January to date.

Overall the cumulative figure is 9,703 cases as of epi week 46/ 2019 with 26 deaths recorded. The deaths involved those aged between eight months and 95 years,” he told reporters outside the Johor state assembly hall here today.

He said several measures were taken during the year including intensifying enforcement and destruction of Aedes mosquitoes breeding grounds.

Earlier at the state assembly, when replying to Gan Peck Chen’s (PH-Penggaram) question on the number of dengue cases recorded in the state and efforts to overcome it, Mohd Khuzzan said 9,491 dengue cases had been recorded from January to Nov 9 (epi week 45/2019) with Johor Bahru recording the highest number of 7,043 cases.

He said several measures had been taken to address dengue fever cases in the state, including the issuing of 'Dengue Alert Letters' in December last year and in July to remind local and regional authorities to increase aedes prevention and control activities

Mohd Khuzzan said that for enforcement activities, 15 ‘Gempur Aedes’ operations were conducted from Jan to Oct this year in addition to conducting the Individual Premises Enforcement Operation.

“Given that Johor Bahru district recorded the highest number of cases, relief teams from nine other districts were also deployed to Johor Bahru from the beginning of the year till now to assist with dengue control activities,” he said.

He said that as of Oct 31, a total of 1,144 activities to find and destroy Aedes breeding grounds, were carried out throughout the state while a mega gotong-royong programme was also carried out twice simultaneously in all districts of the state.