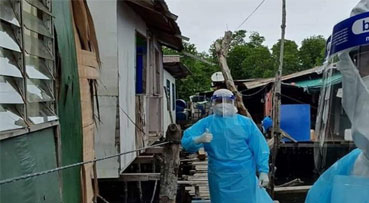 The aggressive active case detection (ACD) undertaken by the Labuan Health Department has revealed a four-fold increase in COVID-19 cases in Labuan over a period of less than a month, according to its director Dr Ismuni Bohari.

The cumulative number of COVID-19 cases here was recorded at 592 yesterday from only 111 on Oct 16.

Dr Ismuni said the ACD, which is part of the targeted screening exercise, is being conducted in the densely-populated areas with the highest number of foreign nationals, such as the two United Nations High Commissioner for Refugees (UNHCR)-sanctioned settlements of Kg Muslim and Kiansam.

“We are expecting the number of cases to surge this week due to the aggressive ACD exercise in these two settlements last week and the fact that all the COVID-19 samples that had been taken from the people there had not been released yet.

“We are also on the lookout of unscreened individuals, who are possibly COVID-19 positive, following the recent emergence of new clusters and in efforts to prevent the spread of the disease to the local community,” he told Bernama today.

Dr Ismuni said the ACD exercise had shown success in detecting new cases and the discovery of new clusters of Titian (in Kg Muslim) last Friday and Tenaga (a kongsi rented-house at Jalan Tenaga) on Nov 2.

He also said the ACD exercise had been extended to the local villages of Kg Lajau and Kg Tanjung Aru.

“We have also conducted the ACD at the busiest spot of Pasar Sentral UTC Building with at least 380 samples were collected and the results are still pending,” he said.

The government has placed Labuan under the Conditional Movement Control Order (CMCO) from Oct 17 to 30 before extending it until Nov 13.