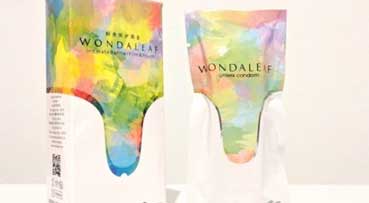 A Malaysian gynaecologist has created the world’s first unisex condom that can be worn by members of both sexes: the Wondaleaf Unisex Condom. The condom is made using a medical-grade polyurethane material used for fabricating transparent wound dressings. The material is inert, thin, and flexible yet durable and waterproof.

Dr. John Tang Ing Chinh, a gynaecologist and founder of medical device company Twin Catalyst Sdn Bhd, explained that the invention is snug and secure much like a regular condom: “It’s basically a [regular] condom with an adhesive covering that attaches to the vagina or penis, as well as covering the adjacent area for extra protection.”

The adhesive is only applied to one side of the condom, and can be reversed and used by either sex.

“I am quite optimistic that given time it will be a meaningful addition to the many contraceptive methods used in the prevention of unintended pregnancies and sexually transmitted diseases,” Tang added.

The Wondaleaf Unisex Condom has gone through several rounds of clinical research and testing and is expected to be available commercially via the brand website this December – each box will cost MYR14.99 ringgit (USD3.61) for two condoms and two sachets of water-based lubricant.