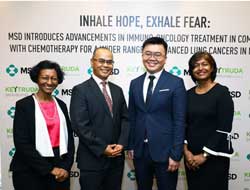 MSD’s launch comes after an immuno-oncology clinical trial which involved patients with untreated metastatic squamous NSCLC. The combination of MSD’s latest treatment along with chemotherapy resulted in significantly longer overall survival (by 4.6 months) and progression-free survival (by 1.6 months). Further, the patients’ risk of death and disease progression was found to be 36% lower and 44% lower, respectively, than from just undergoing chemotherapy sessions.

Squamous NSCLC is associated with shorter survival than non-squamous NSCLC and accounts for approximately 20-30% of all lung cancers, but treatment for squamous NSCLC was external – mostly limited to chemotherapy alone. Now, MSD’s addition will increase the ability of the body’s immune system to detect and fight tumor cells centered in the lung with specific doses of chemotherapy.

MSD is a global biopharmaceutical company headquartered in New Jersey, US. It has been inventing medicines and vaccines for the world’s most challenging diseases and operates in more than 140 countries, including Malaysia. Today, MSD continues to be at the forefront of research to advance the prevention and treatment of diseases such as cancer, HIV and even Ebola.