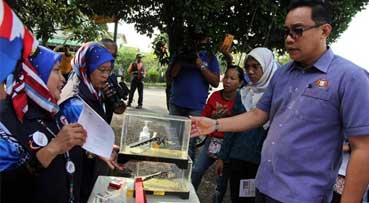 The Johor Health Department will be on standby for eventualities, especially in Pasir Gudang, throughout the Ujian Penilaian Sekolah Rendah (UPSR) examination, which starts tomorrow and ends on Sept 12.

Staff from two health clinics in the district - Masai and Pasir Gudang - were ready to respond to emergency situations in all schools during this period, Johor State Health, Culture and Heritage Committee chairman Mohd Khuzzan Abu Bakar said.

“Yes, we will be on standby tomorrow onwards… not in the schools but at the Masai and Pasir Gudang Health Clinics, to make sure everything is okay,” he told the media during a dengue hotspot enforcement operation in Taman Damai Jaya, Skudai here today.

Mohd Khuzzan was asked if the state health authorities will be placing medical teams in schools during the course of the UPSR examination as a preventive measure should there be a recurrence of air pollution incidences that before this had led to several episodes of students suffering from breathlessness, nausea and vomiting.

The last incident took place on Aug 28, and affected 33 students of Sekolah Kebangsaan Taman Pasir Putih, although they were allowed to go home after being treated by health clinic staff at the school itself.

Last week, the Pasir Gudang district education office notified that it was allowing some 11,300 Year 1 to Year 5 pupils from air pollution 'hotspots’ to go on recorded leave during the course of the examination.

All these schools are located within a five kilometre range of the Pasir Gudang Industrial area.

Pasir Gudang district education officer Jasni Omar was quoted as saying that the leave will take effect from Sept 4 to Sept 11 as a precautionary measure.

A total of 2,175 pupils from these 'hotspot’ schools will be sitting for the UPSR, he added.