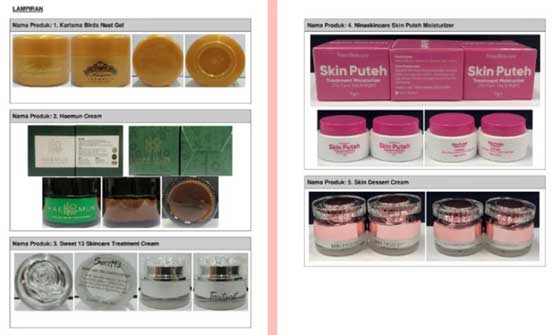 “They are no longer allowed to be sold in Malaysia,” he said in a statement today.

Noor Hisham advised consumers to stop using these products immediately and seek the advice of healthcare professionals if they experienced any discomfort or adverse effects.

He said hydroquinone, when applied to the skin, can cause redness, discomfort, unwanted skin discolouration and hypersensitivity.

It inhibits the pigmentation process, which reduces the skin’s protection against harmful ultraviolet rays, thus increasing the risk of skin cancer.

He also said that using tretinoin without the supervision of health professionals could cause redness to the skin, discomfort, stinging, peeling and sensitivity to sunlight.

In addition, uncontrolled usage of anti-fungal cream (miconazole) can increase the risk of resistance, thus reducing its effectiveness in treating future infections.

“Mercury is banned in cosmetic products as it is harmful to health.

“It can cause damage to the kidneys and nervous system as well as interfere with the brain development of young or unborn children,” he said, adding that it also causes rashes, irritation and other changes to the skin.

Noor Hisham said sellers and distributors should stop selling and distributing these products immediately as it violates the Control of Drugs and Cosmetics Regulations 1984.

A company found guilty can be fined up to RM50,000 for the first offence and up to RM100,000 for subsequent offences.

The public is encouraged to check the notification status of a cosmetic product by visiting NPRA’s official website at www.npra.gov.my or via the “NPRA Product Status” app which can be downloaded from Google Play Store. – FMT