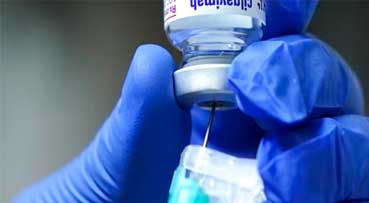 The wave of COVID-19 infections, including the Omicron XBB variant in this country is under control, said Health Minister Khairy Jamaluddin.

He said the situation was a result of the people’s support who listened to the advice of the Ministry of Health (MOH), so there was a decrease in new cases of COVID -19, including the variant to 13.4 per cent last week compared to the previous week.

“I also asked the deputy director-general and infectious disease specialist about the admission (of COVID -19 patients) to the hospital. It appears normal, it is no longer increasing and might even drop.

“…and we found that although the fatality rate has increased slightly to 0.07 per cent in the same comparative week, it is still much lower than the CFR (case fatality rate) indicator which we have set at three per cent,” he told a press conference on the current COVID-19 situation here today.

Khairy, however, advised all people in the country to be vigilant or cautious, especially during ceramah programmes in the last few days of the 15th general election (GE15) campaign.

“So please be vigilant, be careful and be safe when you go and cast your votes. I have asked all the experts for their opinion whether it has peaked or is levelling off, in terms of the number of cases and so on and they told me that the recent wave is under control,” he said.

Elaborating further, Khairy said MOH has identified 40 cases of COVID-19 relating to the XBB variant between Nov 11 and Nov 17, bringing the cumulative cases of the variant to 60.

“…but again (although) XBB is overtaking (compared to omicron BA.5), but we have not seen correspondences in severity emerging which is a good sign for us,” he said.

Meanwhile, Khairy also urged the public to receive the COVID-19 vaccination because this measure can reduce the symptoms of infection as well as side effects that can lead to death.

Khairy said vaccination efforts have successfully reduced all indicators of disease severity in terms of hospitalisation and the use of respiratory aid devices.

On the treatment of COVID-19 patients, he said that there were no deaths in patients treated with Paxlovid at the community level.            “So far, the patients given Paxlovid and others at the health clinic have all recovered. This means that we are probably really at the end of the transition to endemicity,” he said.

On CanSino Biological’s inhalable vaccine, he said MOH is currently recruiting participants for the trial, which is expected to start in the next few months.

Last month, CanSino Biological introduced a new type of COVID-19 vaccine that is inhaled rather than administered via injection. – Bernama