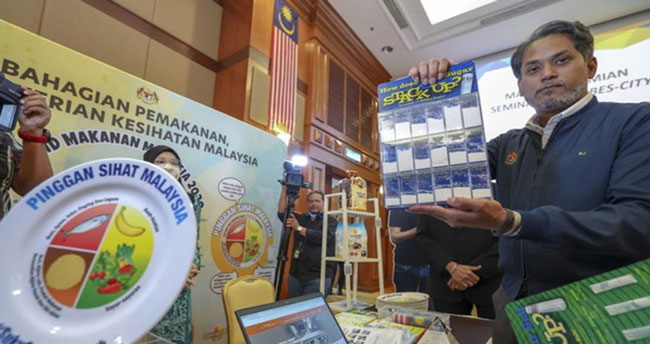 The Health Ministry (MOH) through the Nutrition Division will implement a food calorie labelling pilot project in restaurants and cafeterias early next year to assess the feasibility of a menu labelling policy in Malaysia.

Its minister, Khairy Jamaluddin said for a start, it will be introduced in restaurants in Putrajaya besides MOH and ministry cafeterias as well as fast-food restaurant chains.

“Currently, we are in the planning stage to identify cafeterias and restaurants that want to participate in this pilot project that will be implemented for at least six months to a year.

“MOH will prepare the information (calorie count) so that they (entrepreneurs) do not need to spend money on consultants to label their food menus. We just ask for cooperation from the restaurant management so that when the calorie information is ready, it can be placed on the menu in their food outlets,” he said.

He told reporters this after the launching of the Putrajaya Anti-Obesity Seminar and Trim&Fit Weight Management Module programme here today to be implemented in all ministries and departments.

When asked if this pilot project will lead to a menu labelling policy in the future, Khairy said the project was created to see if there would be changes in community behaviour.

“After this, MOH in an evidence-based way would examine the data, in terms of the success of the pilot project, before we make a decision regarding the mandatory labelling policy because there are countries that have made it mandatory and we will see the effects,” he said, adding that the pilot project will be expanded throughout the country if implementation is successful.

He said determining the calories in restaurants will be done by experts in the Nutrition Division by looking at the ingredients to produce the dish before the analysis is made.

Meanwhile, the Trim&Fit weight management programme is one of the interventions carried out according to the “settings” of the workplace to give overweight and obese civil servants the opportunity to lose weight in a healthy and safe way.

The National Morbidity and Health Survey 2019 (NHMS 2019) recorded prevalent obesity in adults aged 18 and above at 19.7 per cent while 30.4 per cent of them were overweight.

It means that one out of two Malaysian individuals (50.1 per cent) are overweight and obese, and out of the total, the issue of obesity among civil servants working in government agencies and departments had reached 41.4 per cent. – Bernama