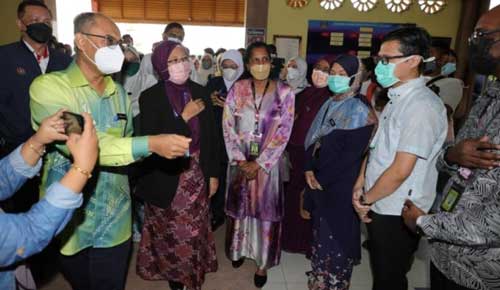 The Ministry of Health (MoH) will improve health services, especially in terms of infrastructure, in Sabah and Sarawak.

Its minister, Dr Zaliha Mustafa said her ministry has taken note of the complaints and problems related to health services in both these states.

She said these included the incident on Tuesday involving an elderly woman from Lawas who was reported to have died while being sent to the Miri Hospital after the ambulance was unable to pass through the Sungai Tujoh Immigration, Customs, Quarantine and Security (ICQS) Complex in Miri, Sarawak.

“Actually, we are aware of the health services issues in Sabah and Sarawak, and we have also seen what caused it to happen in Lawas.

“It is about infrastructure… the trip from Lawas to the hospital in Miri is very far away and there are several checkpoints to pass through, therefore, these are among the issues we need to try to improve,” she told reporters after paying a working visit to the Segamat Hospital here today.

According to a Borneo Post report, there was no one at the gate of the ICQS complex when the ambulance arrived at the complex at around 1.30am.

In the meantime, Dr Zaliha said she would examine one by one the earlier reported 13 ‘sick’ projects under the MoH before any action is taken.

“We need to look into each ‘ailment’ and then go into detail. We need to look at the complaints and diagnosis, and only then we can do something to overcome the problem,” she said.

In September, former health minister Khairy Jamaluddin was reported to have said that efforts were underway in collaboration with the Ministry of Public Works to find a way either to speed up the projects involved or through the process of appointing a ‘rescue contractor’.

Meanwhile, Dr Zaliha, who is also the Sekijang member of parliament, said the Segamat Hospital’s additional new building, worth RM90.5 million, will be operational early next year.

She also said the new building, which began construction in 2018, will be equipped with four operation theatres, an intensive care unit (ICU) as well as a respiratory and hydrodynamics unit (RHU) that could accommodate the needs of 223,000 residents in this district.

“With the facilities provided in this additional block, Segamat Hospital will be able to further expand its services to meet the needs of the residents in the district,” she added.