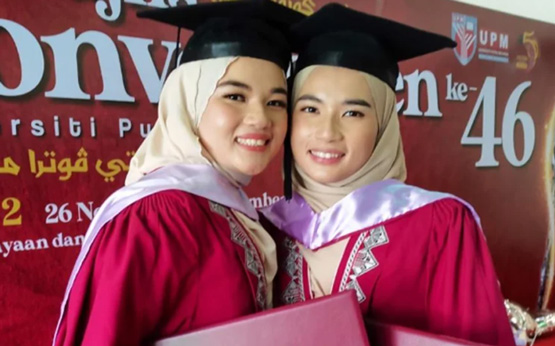 A pair of identical twins have achieved their dream of becoming doctors after they both graduated in medicine at Universiti Putra Malaysia today.

The source of inspiration for 25-year-old twins Nurnadhirah Zulkifli and Nurnadhrah Zulkifli was their mother, who is a nurse.

They said they had dreamt of becoming medical doctors since finishing secondary school.

“We went through every bittersweet experience together as twins. Alhamdulillah, we were able to share this happiness with our parents,” she told reporters after the university’s convocation.

She said, young people, especially women, should not be afraid to pursue their dream of becoming doctors.

“If you have passion and interest in medicine, don’t be afraid to pursue your dreams, especially now as we are short of female specialist doctors,” she said.

Nurnadhrah, who is younger, said the knowledge gained in the field of medicine has made her want to give back to the community

“I want to serve the community, especially those who have imparted knowledge to us,” she said.

For now, she wants to focus on completing her two-year housemanship before furthering her studies to be a specialist in ophthalmology.

Nurnadhirah said she wanted to take up internal medicine, specialising in the diagnosis, treatment and prevention of various acute and chronic diseases.

The twins were among the 5,688 graduates taking part in the convocation, which continues until Dec 2. – FMT