Many women still not getting screened for breast cancer 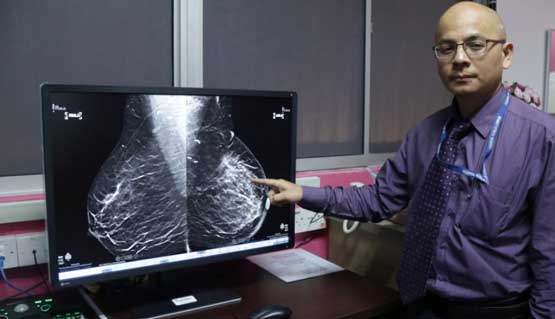 In 2008, Fatimah Ibrahim, who was 65 years old then, was putting on a bra when she felt a small lump in her right breast. Having lost her younger sister to breast cancer decades ago, she knew what it could be.

“I kept thinking I had to take care of myself. My sister missed it. She didn’t know and cancer spread. And when she tried to seek treatment, it was too late,” she told Bernama from her home in Perak.

The mother of three then went to the hospital, and got a mammogram and biopsy, which confirmed she had early Stage II breast cancer.

As someone who was between the ages of 50 and 74, and with a family history of breast cancer, Fatimah should have had an annual mammogram. But prior to this, she had never had a mammogram, depending instead on self-breast examinations.

The Health Ministry’s (MoH) clinical guidelines recommend women between 50 and 74 get a mammogram every two years, similar to recommendations in the US. For women who are high risk for breast cancer, they should get a mammogram annually from 40 to 60 years and biennially after the age of 60.

However, the Malaysian Breast Cancer Foundation and medical experts recommend an annual mammogram for women above the age of 40.

Experts in the field told Bernama early detection as part of regular maintenance is still rare in Malaysia, despite decades of messaging in the hopes of increasing awareness on the importance of early detection.

Medical experts put the risk of breast cancer at one in about 20 women in Malaysia. According to the World Health Organisation (WHO), breast cancer is the most common cancer among women at 32.9% or 8,418 new cases in 2020, followed by colorectal cancer at 11.9% and ovarian cancer at 7.2%.

The overall five-year survivability rate of breast cancer in Malaysia is at 66.8%, as specified in the Malaysian Study on Cancer Survival 2018 (MyScan report). The rate is better than some countries, such as Thailand and India, but worse than developed countries, as well as China at 80.4%.

“The minute you detect it, there are lots of treatment options available for you to overcome it than keeping it there, rather than letting it spread and coming in later when nothing can be done anymore,” she said.

In Malaysia, Stage I has an 87.5% rate of living for at least five years after diagnosis, while Stage IV has 23.3%.

The most common stage of breast cancer diagnosed in Malaysia is Stage II, when the cancer is between 2cm and 5cm in diameter, either in the breast or in the nearby lymph nodes or both. It is early-stage breast cancer and has an 80.7% survivability rate.

Sunway Medical Centre Velocity oncologist Dr Hafizah Zaharah Ahmad told Bernama the biggest concern is when the cancer has gone to the lymph nodes — part of the body’s immune system.

Once the cancer spreads, it gets harder to treat and the chances of survival go down. Once a patient reaches Stage IV, current treatment involves palliative care, which is basically managing the cancer by trying to contain its spread and any pain.

Doctors in private practice report seeing more patients in the earlier stages than the later. Doctors in public service report the opposite.

“About 50% of my patients are Stage III and IV,” said Dr Raflis Zuhairee Awang, breast and endocrine surgeon at HKL.

HKL Radiotherapy and Oncology head Dr Ros Suzanna Ahmad Bustaman said the news was not all bleak in the public healthcare system as the trend goes both ways.

“On the ground, patients are coming more and more at an earlier stage. We’re seeing more Stage I and Stage II,” she said.

All doctors agree that awareness has improved across the board compared to decades ago, based on statistics from the first National Cancer Registry report 2007-2011 and the latest 2008-2016, which found diagnosis and survivability rates improving. They also say there is room for improvement.

A 2021 online poll by Wan Ning Lee et al on Malaysians’ awareness of breast cancer and screening methods supports the viewpoint. It found a majority of Malaysians surveyed have a moderate knowledge of them, with women having more knowledge.

Despite the findings, the authors concluded more education was needed to increase health literacy and awareness.

Medical experts blame the low screening rates — about one out of 10 women go for screening, according to Cancer Research Malaysia — largely on fear, misinformation and stigma.

Doctors say a person’s level of education does not necessarily indicate whether someone goes for early screening. Many are too fearful and prefer to be in denial, rather than face reality.

Dr Hafizah Zaharah said many of her late-stage patients were educated, but feared coming in after detecting a lump in their breast. She added they only came in once they started to feel pain, which was usually too late by then.

By the time breast cancer causes pain in the breasts, it is usually because the tumour has grown and penetrated the skin, causing pain, oozing, itching and bad odour.

The breast cancer department at HKL recently had a real-life event that showcased the fear people have about cancer, regardless of awareness and educational level. The department held a mandatory screening programme for their staff aged 40 and above, and found two staff members with breast cancer.

“They’ve had the lump for over a year. And between the two, one of them is still thinking about treatment,” said Dr Raflis Zuhairee.

“I asked ‘You’re staff. Why didn’t you come and attend this earlier?’ ‘I was scared’ — just the denial; it’s fear and denial and also stigma. They do mammograms and if there’s anything there, they’re going to lose their breasts, they’re going to lose their hair — what everyone fails to realise is that there is an 88% chance of survival at Stage I compared to Stage IV (if they waited),” she said.

The doctors told Bernama many of their Malay patients, who are the bulk of patients in the public healthcare system, opt for alternative treatments.

Some of the reasons they cited for refusing conventional treatment include not wanting to lose their breasts and fear of the side effects of cancer treatment.

Dr Ros Suzanna said treatment options for cancer have increased and are more personalised for the patient depending on their cancer type and availability of the medicine. However, the problem comes not during treatment but when trying to get their consent for treatment.

“When we discuss treatments with patients, we’re very frank. What happens, what are the potential side effects. So, most of the time, we would lay everything on the table. And then patients hear, ‘Huh? Side effects?!’ Of course they will run off.

“But, alternative medicine, there’s no such thing. They would actually promise all the good things: No side effects, no need to go for an operation, who doesn’t want that?

“At that point, we lose the patient to alternative treatments,” she said, adding they usually come back after the treatments fail. At that point, their cancer has progressed, often beyond help.

Other than fear, there is also the challenge of cost and resources. Women outside city and urban centres find it hard to access screening and go for treatment due to time commitment. Hospitals in rural areas also do not have as many resources as HKL and private hospitals. Travelling from a rural area costs time and money.

Breast surgeons, for example, are few and far in between with only about 30 practising in the country, according to Dr Raflis Zuhairee. And while all government hospitals have a mammogram machine, not all have the latest version.

NGOs such as the Breast Cancer Wellness Association (BRCWA) are trying to fulfil that gap by travelling to rural areas to provide women with clinical breast examinations and teach them how to do them on their own.

Retired nurse and community outreach manager at BRCWA Datin Matron Zainab Abdullah told Bernama, while resources for women outside city centres have improved, the waiting time has only improved slightly.

“If possible, waiting time for an appointment (with a specialist) should be reduced. While there has been an improvement, it is still below our target,” she said, adding it can take up to two months to see a specialist in some places.

As the future beckons, advances in treatment and early diagnostic methods will occur. At the same time, Malaysia could also implement some improvements to prepare for the future.

“Here, we don’t do (genetic testing for BRCA mutation, which causes breast and ovarian cancer) so that’s why these patients with the BRCA mutations don’t know they have an underlying genetic mutation. By the time they come, it’s usually in the later stage,” said Dr Maninderpal.

As for Dr Ros Suzanna, she said there needs to be a cultural change into being more health-focused.

She said Malaysians need to be their own advocate and develop better health-seeking behaviours, such as keeping track of the family medical history and regularly screening for any possible diseases, regardless of socioeconomic background.

“The health-seeking behaviour is not there. They think they are all right,” she said.

Fourteen years after she was first diagnosed, Fatimah is glad she did some of her own health-seeking behaviour, even though she was not initially aware she should have been doing her mammogram exams.

She is also happy that she did not allow any fear or embarrassment to deter her when she found out her surgeon was male.

“I didn’t even think of being embarrassed, I just thought I don’t want to be sick,” she said, adding she had two grandchildren born in the time since she went into remission in 2010. She now has 14 grandchildren in total. — Bernama