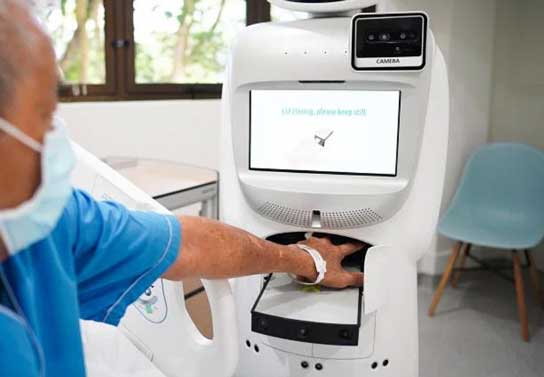 The successful trial of a robot that takes the vital signs of patients at their bedside in Alexandra Hospital (AH) has shown it is able to replace at least two hospital nursing staff over the course of a year.

It is hinting at a possible future where nurses are supported by robotic nursing assistants in the wards.

Florence, the robotic nursing assistant, can identify patients by scanning their wrist tag or with its artificial intelligence-based image recognition software before taking their vital signs using its camera, sensors and pulse oximeter. The data goes directly into the National Electronic Health Record.

It can also deliver medication, snacks or other items to patients. As it approaches a patient’s bedside, it can detect which side of the bed the patient is nearer to, so it can move to that side.

Florence was created with a grant of about $1.8 million from the National Robotics Programme, a multi-agency effort tasked with developing the local robotics ecosystem. It was trialled for eight months until April. AH is now planning to test it at another hospital as part of the grant requirement.

As automation and robots continue to be tested to see if they can help improve the care of patients and address the manpower crunch in the healthcare sector, they will become a more common sight for patients.

Local start-up Articares, which developed it, plans to deploy H-Man at hospitals in the other healthcare clusters in 2023, said Prof Wong.

At the hospitals, automation and robots can help to improve workflows and allow nurses to spend more time with patients. Ms Doreen Heng, AH’s assistant director of nursing, who was involved with the development of Florence, said the robot can free up nurses to do other value-added nursing tasks, including going on home visits.

Whether Florence will be deployed in a big way depends on whether the manpower savings are worth the cost of the robots, which has yet to be determined, said Professor Lawrence Ho, the director of the National University Health System’s Centre for Innovation in Healthcare. It would have to be scaled up in a big way to bring the cost down, he added.

“I think, eventually, we have to accept robots,” said Prof Ho. “I embrace all the robots because to me, the issue is whether we are willing to give up our current workflow, because for technology to be adopted, you have to unlearn and relearn.

“Unlearning is tough because we hold on to what we know. It is our power. So rather than saying that you’re powerless now, this robot is going to take away your job, (you say that) you’re going to be even more powerful, and the robots are here to be your assistant.”

Today, patients will not only see robots that are created in Singapore, such as Florence, being tested at hospitals, but also robots bought off the shelves, like Temi the robot, which has been called an iPad on wheels.

At Changi General Hospital, in the early part of the pandemic, Temi helped to link isolated Covid-19 patients in the busy intensive care unit with their family members via video calls, after chief nurse Png Gek Kheng found it lying idle at the hospital’s robotics centre.

“Nurses didn’t need to worry about having to stand there (holding the phone) and then worry about whether they have finished their work,” she said.

Ms Png said they want to get robots to orientate visitors, and have placed tablets at every bed in the wards for patients to check their daily schedule, play games and order food.

Temi is also being used at several other hospitals, such as at TTSH, where it delivers medication.

In Hong Kong, where Temi was developed in 2019, it is used in 23 hospitals and more than 300 nursing homes, said Mr Lim Wen Chyi, managing director for RoboSolutions, which distributes Temi in Singapore, Malaysia and Indonesia.

The Singapore University of Social Sciences (SUSS) is also trialling Temi for various uses at three nursing homes and two daycare activity centres. This includes getting Temi to do video education, alert staff to change diapers when it detects ammonia in the air, and being the first responder when the call bell is pressed, said Dr Kelvin Tan, the head of SUSS’ minor in applied ageing studies. – Strait Times

Hisential: a new, accessible healthcare and wellness brand for men

Khairy: MySejahtera to be used as digital platform for public health